Its that time of the month again , back for another Lab Sessions on TunnelFM . This month we have the sound's of Sergio Lora and Snr Denzil .

After years and years listening to deep house music Sergio decided to start mixing. At the age of 36, he gradually found his style with the deep house genre . Late 2013 he posted his first set on Soundcloud. It wasn't long until german magazine Kulmuche.de promoted one of his sets . Then came the guest slot on Saturosound session . Nowadays you can hear him live at Vivero Beach Club sunset session in Sitges, Barcelona.
Sergio alway's has the intention and hope that everyone who hear's his sets have a good time.

Snr Denzil occassional dj lover of deep house, punk, ska and anything else that has a wee bit of sincerity to it. Married to Di, free thinker, hedonist and daft. Think for meself, govern meself and don't follow the rules. Used to dj a lot in and around Liverpool at the likes of Igloo, Aztec, Discoscience, I was a regular at tne legendary Dragon in Liverpool (gone but never forgotten). Around the country played a free parties in the county of Rutland with the JBL Sound System, Sankeys in Manchester and a night called Serenity in Brighton. I have played on the same bill as such house/dance music luminaries as John Digweed, Silicone Soul, Da Sunlounge, Mr C & Shur-I-Kan, Milton Jackson, Andrew Weatherall, Frank Lorber & most recently Shadowchild to name a few.
Then there was the short lived ColleKtivE which musically had the potential to go places and most recently Terrace slots at Av.Verde (if there ever was a party to attend in the north west it has to be this)..... No longer committed to any club night following the demise of Igloo which saddened me but life goes on, who knows what will happen next and even what will happen after that.. Never say never. 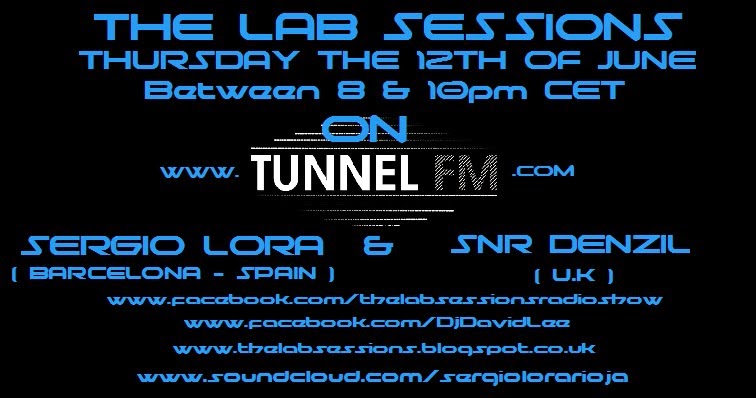 Posted by The Lab Sessions at 22:13 No comments:

Wednesday again , hope everyone enjoyed the Bank Holiday weekend . Back to the grind but the weekend is in sight . This week's track from the past is BT - Fibonacci Sequence , enjoy!

It's that time again , Happy Hump Day . Today's track from the past that did it for us is
Moony - Dove ( John Creamer & Stephane K Mix ) , enjoy!

Posted by The Lab Sessions at 12:47 No comments:

Mid-week again , Happy Hump Day from everyone at The Lab Session's , today's track from the past is De'Lacy - Hideaway (Deep Dish Remix) , enjoy!

And here's my mix from the show , hope you enjoy this one too : )

Posted by The Lab Sessions at 18:56 No comments:

Thanks to everyone who listened to the show last night on Tunnel FM , here's the 1st mix of the show from Dean Marsh , enjoy : )

Posted by The Lab Sessions at 18:55 No comments:

Half way there again , the weekend is in sight , hope everyone's week is flying over . This week's Wednesday track from the past that did it for us here at The Lab Session's is Laurent Garnier - The Man with the Red Face :  ) let's ave it!

The Lab Sessions
( Lab / Laboratory - is a facility that provides controlled conditions in which scientific or technological research, experiments, and measurement may be performed ) The Lab Sessions aims to bring you some of the up and coming and already established Dj's from across the globe . Hosted by David Lee and a guest every Month there is no specific Genre of House as the main focus . Expect sound's from right across the spectrum of House Music . Remember House is a feeling!